The Importance of Muscle

Skeletal muscle is a unique and extensive body tissue that can vary between ~25% and 55% of body mass, depending on gender, age and physical fitness. While it is typically thought of as having a physical, movement-oriented role, in reality the skeletal muscle system is fundamental to life. It contributes to crucial health related functions including breathing, metabolism, digestion, blood circulation, immune system status, blood glucose regulation, and overall quality of life.

The health of our muscles therefore (‘MuscleHealth’) is essential for our overall health and wellbeing at any age and at all levels of fitness and mobility.

MuscleHealth is defined as: ‘The capacity of a muscle to store, generate, and replenish energy’

MuscleHealth is a unique concept developed by MuscleSound that assesses and collates the interrelated components contributing to the healthy functioning of muscles. Such information is crucial for anyone concerned about their physical, mental and medical health. MuscleHealth provides action-oriented information that can be tracked over time and is highly relevant to athletes and non-athletes alike.

Some background information on our MuscleHealth definition

1.    MuscleHealth refers specifically to Skeletal Muscle and does not include the two other types of muscle. (i) ‘Smooth’ (or ‘Non-striated Muscle’) and (ii) ‘Cardiac’ (or ‘Involuntary Striated Muscle’).

3.    These reported percentages are for “apparently healthy” individuals (No obvious signs or symptoms of disease or chronic illness). Patients in ICU or other frail individuals are likely to have much lower percentages of skeletal muscle.

4.    To be clear though, the issue here is less the actual percentage reported (as long as it is within a scientifically acceptable range), but more to emphasize the fact that skeletal muscle is an "extensive body tissue”, with a major effect on a variety of body functions (It’s not just about lifting heavy things!). See introductory paragraph on the importance of muscle.

5.    Muscle mass/Size is also related to ”Sarcopenia”, the clinical term for the loss of muscle tissue as a natural part of the aging process (Taken from two Greek words:  “sarx-“  = “flesh” and “penia-“ = “poverty”). Sarcopenia has been described as “... the single most frequent cause of late life disability”.

6.    FYI, there is another term for muscle mass loss – ”Cachexia” (pronounced ‘kakeksia’). This is the clinical term for muscle wasting caused by chronic illness (Taken from two Greek words: “kakos-” = “bad” and “hexis-” = “condition”. Cachexia is more often found in ICU hospital units.

7.    Finally, attached are two graphics (below) from a study published in the Journal of Applied Physiology that reports on skeletal muscle mass distribution by age and gender. It relates to the sarcopenia definition described above. 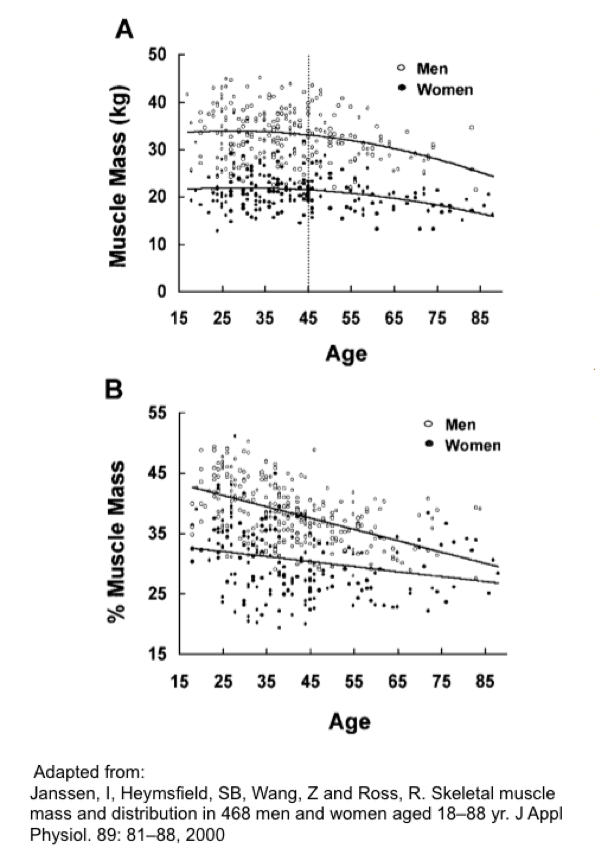 NOTE: It is important to also realize that these graphs are based on averages taken from different studies, that all report different percentage changes. They are also studying different populations, often with different assessment techniques. Despite this, however, the findings in such studies tend to remain within the same general range, which lends confidence to the accuracy of the overall trends reported.