Differences in strength and power levels between corresponding left and right-sided muscles of the body have been reported in professional athletes. These differences have been associated with increased injury risk and performance deficits. Muscle thickness is linked to the ability of a muscle to exert both strength and power.

The symmetry (balance) of muscle thickness scores between contralateral muscles.

Muscle Size Symmetry is a non-invasive, easily acquired surrogate for traditional measures of contralateral muscle differences. When contralateral differences - or negative trends - in Muscle Size Symmetry are found, this provides an early - and easily acquired -  “heads up” for coaches and trainers. Potential strength/power deficits can be quickly screened for, and a much earlier determination made by the athlete/coach as to the need for further testing and evaluation.

The illustration below displays the symmetry of muscle thickness scores for Right and Left Thigh -  Rectus Femoris (RF). The Left RF score is 7% thinner than the Right RF score. 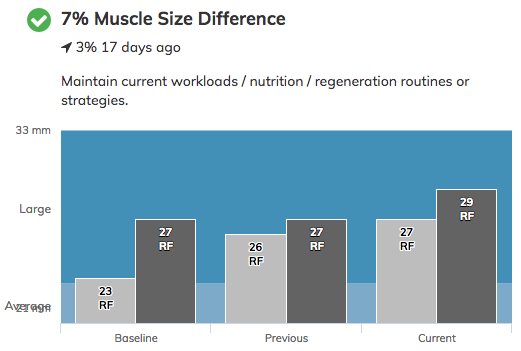 MuscleSound also tracks Muscle Size Symmetry over time, and against the baseline assessment to identify trends that can be used to fine tune training or rehab regimens